Port Phillip Bay and Westernport are Victoria's largest marine embayments. Their catchments have been highly modified and are continuing to undergo change through urbanisation.

Port Phillip Bay has an area of approximately 1950 square kilometres and is relatively shallow, with an average depth of 13 metres.

The Bay's catchment covers over 9790 square kilometres, with 21 natural drainage basins and a variety of habitats including sandy seafloor, seagrass beds and rocky reefs.

Most of the seafloor is sand and silt, which is home to diverse communities of invertebrates. These large areas of sand and silt are sometimes covered by seagrasses, which is important habitat for much marine life, especially juvenile fish.

Rocky reefs with hundreds of different seaweeds can be found on some margins of the Bay. 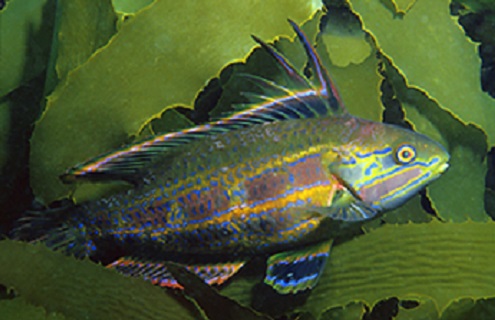 The Bay is of significant social, economic and environmental value to Victoria. Areas of its diverse underwater environment are also protected in marine national parks and sanctuaries.

The greatest risks to the health of Port Phillip Bay are from catchment-based sources of pollution and marine pests. The Port Phillip Bay Environmental Management Plan outlines actions that are being taken to manage these risks and avoid negative ecological impacts.

Algal blooms are composed of tiny floating marine plants. They can look like a murky, sludge-like substance floating in marine waters and washing onto beaches. Water affected by algal blooms can become temporarily discoloured and have an unpleasant smell. Algal blooms vary in colour and can be red, pink, white, green or brown.

Algal blooms in Port Phillip Bay often occur after heavy rain, and often coincide with warm weather or light winds. They are generally localised and last only a few days.

Blooms of toxic algae in Port Phillip Bay are very uncommon. Most blooms occurring in the Bay are not the same as toxic blue-green algae that occur in Victoria's lakes, dams and rivers. They usually dissipate within a short period of time. People should avoid contact with algal blooms.

Some species of algae that can produce toxins have been found in the Bay and these can concentrate in shellfish. Commercial fish and shellfish harvested from the Bay are subject to quality assurance programs that include active monitoring of shellfish harvesting areas.

What you should do

Visit the Yarra and Bay website to find up to date information on algal blooms in Port Phillip Bay.

The Northern Pacific Seastar is a serious pest in Australia because of its impact on native marine ecosystems and marine industries such as shellfish farming. We cannot remove this species from the Bay, so our priority is to stop this pest from spreading to new areas along Victoria's coastline.

The Yarra and Bay website provides water quality information for people who want to use Port Phillip Bay and the Yarra River for recreation, report an environmental incident or get involved in protecting the Bay and its waterways.

Westernport has an area of approximately 270 square kilometres, is relatively shallow and contains extensive areas of saltmarsh/mangrove and seagrass communities.

The mangrove-salt marsh vegetation of Westernport is of regional, national and international significance. It plays an important role in stabilising the coastal system, nutrient cycling and providing wildlife habitat.

Mangroves in Victoria are at their southern-most limit, with the most extensive communities occurring in Westernport.  Salt marshes are often associated with mangroves.

Many changes have occurred in the area and distribution of salt marsh and mangrove communities since the early 1800s. Most of these changes are either directly or indirectly related to human activities.

The banded zones of salt marsh and mangrove in Westernport represent a long-term successional sequence, with mangroves advancing seawards to be replaced by salt marsh. Landward movement of mangroves into salt marsh is recorded in some areas of Westernport.